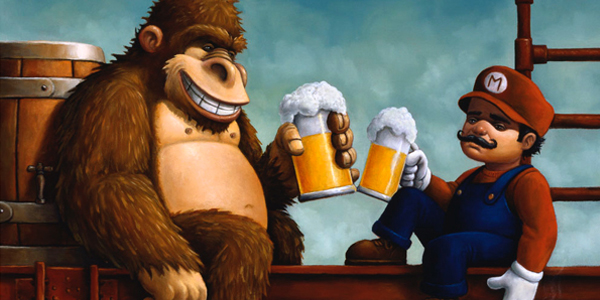 Before we start a gaming sesh, we all know that at some point, we will need some kind of liquid sustenance to keep us well oiled for the battles and adventures that await us. But what if your poison of choice?
For me, well that all depends on what it is exactly I am planning on playing.
A first-person shooter? It has got to be 100% caffeinated, be it coffee or a good old energy drink, it has to be able to give me an edge over my competition. The same goes for any online competitive game, I feel like caffeine gives me an edge, and maybe a palpitation or two.

If we are talking RPG however, well that’s a whole other ball game, call me old fashioned but it’s got to be an ale. I don’t know why but there is something about delving chin first into a fantasy RPG that makes me want a pint of old school ale. I don’t know whether it’s the thought of being in a tavern with some hard-core stale smelling adventures that appeals to me but it’s gotta be beer for an RPG. As you can imagine, this can cause a few issues from time to time, mainly the increase in toilet breaks, slow reflexes, slight loss of vision and the impending, ‘where the hell am I?’ when I load the game up the next morning.

Everything else, well sadly that would have to be good old boring H20. I try to drink as much water as I can but I feel like gaming is a good opportunity to get the litres put away. I don’t know about you but I drink 10 times more when I’m gaming then any other time, I don’t know whether it’s the pressure, loading screens or need for breaks but I drink a lot while I’m gaming!

Do you have a particular way of keeping yourself oiled through a good gaming session? Let us know!

It has been a year since the release of the hugely successful Shu Caverns of the Nighjars , yet when I think of the most recent kick-ass platforms, it still appears to be right up there at the top of the list! From the amazing developers that brought you the hilarious Gang Beats and a number of brilliant Samsung VR titles, Coatsink Studies pulled it out of the bag yet again and produced a truly stunning platforming experience with one the best soundtracks of the last 12 months.

You play as Shu, whose village has been destroyed by a terrible storm. On your journey of survival, you will explore and conquer your way through  5 diverse lands in 15 huge and gorgeous levels, finding an abundance of collectables and stumbling across an original cast of 10 characters, all of which have their own unique powers.

Shu is yet another example of how indie platformers can be hugely successful on a console as well as helping to introduce an alternative gaming experience to those console gamers that confine themselves to AAA games.

If you haven’t already checked it out, Shu is available now on PC and PS4 and coming soon to PSVITA. I myself am really looking forward to the PSVITA release, the console is still lacking in decent indie titles and I feel this will be a great addition.

From the talented developers over at Bit Kid Inc Baltimore comes a brand new side scrolling action adventure Chasm. Taking inspiration from classic Metroid, Chasm is a procedural generated action RPG adventure platformer that appears to tick all the boxes of what gamer’s expect from an awesome indie platformer in the making.

Set in a fantasy world, you play as young soldier Daltyn, sent to investigate a small mining community. Having arrived at the town, paranormal forces trap Daltyn and seal the town from the outside world. As Daltyn, you must explore and battle your way through six huge procedurally generated areas to save the town and maybe even the world. The authentic pixel art style appears nothing short of stunning, with each of the six environments having a distinctly different look.

Along your journey you will encounter huge boss battles, avoid traps, stumble upon precious loot and equipment to customise your character and learn new kick ass abilities to turn your enemies into rubble. With such original content and seemingly high production value, Chasm is set to be a formidable contender in what could be considered a busy market of pixel art platforms.

Unfortunately, Chasm has yet to have a release date, but is set to be available on PS4, PC, Mac and Linux.

Following the huge success of Reigns last year, Devolver Digital announced earlier this year that they are working on a exciting follow up, Reigns: Her Majesty.

Reigns: Her Majesty, similar to its predecessor, see’s you trying to maintain a balance between the powerful factions within your kingdom. You must navigate through the treacherous world of politics, forming friendships, rivalries and making use of mystical items to aid on your journey through a brand new fantasy medieval kingdom.

As Queen, you must exploit and outwit those unfortunate souls that wish to depose you and your King. You will get Royal Challenges thrown your way, creating specific goals to help you unlock new cards and directions for your story. All of which can be done by simply swiping left or right. Simple game mechanics delivering a complex and dynamic story.

If this follow up is anything like its predecessor, it’s going to be a royal riot. Available on IOS, Android, PC and Mac later this year.

Fell Seal: Arbiter’s Mark is a turn based tactical RPG currently in development by Florida based 6Eyes Studio. Taking inspiration and design elements from both steampunk on JRPG titles, Fell Seal fits perfectly into the genre without feeling too familiar.

Both in look and feel, Fell Seal is a love letter to Final Fantasy Tactics and the Disgaea series, bringing in extensive character customisation, abilities and lush fantasy settings that fans of these titles have grown to know and love. Like the previously mentioned titles. Fell Seal has an in depth character management and class system, allowing each player to experience a unique journey within the game. The map designs are well throughout and full of treasure, bringing further strategic elements to the game.  The game is story driven , including both cut scenes and story driving characters that will accompany you on your journey.

With such lush design, smooth thoughtful gameplay and an original score, it is evident that the production value is sky high for this title.

We highly recommend getting hands on with the demo which is available now on Itch.io and Gamejolt. If you love the game as much as we did, why not support its development on kickstarter and receive the game upon its release in June 2018 for as little as $20.

Earlier today an exiting new project Regions of Ruin was released on Steam Early Access. Created by Australian developers Vox Games. Regions of Ruin is a 2D side scrolling town building RPG set in a rich fantasy world.  You must fight, explore, complete challenges and build your way through an epic side scrolling pixel art open world creating settlements along the way. Failing to succeeded could lead the Dwarven race into extinction!

Alongside settlement building, the games RPG elements allow you to unlock hero skills as well as gear up your character for hack and slash combat against all kinds of menacing enemies, including big ass bosses!

This may not be the first game of its genre, but the original fantasy setting and rich settlement building definitely give it an edge. The 2D pixel art lends itself perfectly to the look and feel of the game, without making the open world feel small.

If you fancy giving Regions of Ruins a punt, its available on Windows, Mac and Linux through Humble Bundle and Steam for around £13. We expect great things from this title and are excited to see what gamers think of it!

Do you have it in you to become the leader of a steam powered city in a world that is completely frozen?

Poland based developers; 11 Bit Studios latest project ‘Frost Punk‘, this is the challenge that you are faced with.  In this mixture of survival, city building society simulation, you must manage resources as well as oversee the well-being of your people to ensure their survival in the beautifully crafted frozen wasteland.  As you would expect from 11 bit studios, as leader, your must make difficult choices that pitch your ambitions against your emotions in order to keep your city and it’s people alive.

If that pressure wasn’t already enough, you will be made responsible for the creation of laws and customs that will either shape or oppose your society’s beliefs. This, alongside resource management is surely going to test even the most seasoned tactically player.

For those that feel tied down with my too much strategy and decision making, ‘Frost Punk‘ encourages the player to get out and explore beyond the city walls to enjoy the deep lore of the land and to learn how it got into such a desperate state.

‘Front Punk‘ is truly a first in this mash up of genres and we can’t wait for the responsibility to be thrust upon our shoulders later is year.

Since its release in July 2017, Pyre has been a massive success and received critical acclaim from all of the major review platforms. Being the 3rd game to come from Supergiant Games, the fans expectations were high, and rightly so, both Bastian and Transistor have been huge successes and been a driving force in bringing indie games to the console platform. Pyre was no exception. Set in a rich high fantasy world, Pyre sets a new bar when it comes to cross genres as it combines fantasy RPG with sports, sports! The mash up of hefty RPG storylines with sports like gameplay brings back fond memories of playing blitzball in Final Fantasy 10.

As a member of ‘Triumvirate’ The Nightwings, you play as ‘the reader”, whose purpose is to guide your team to compete in rites in order to gain each of your companions liberation and freedom from the ‘Downside’ so that they may return to the fantasy homeland of ‘The Commonwealth’. The game introduces a variety of characters that have been as beautifully and lovingly crafted as the game itself. The villains as particularly brutal, making kicking their arse in the rites all that more satisfying.

When given the opportunity to liberate my first companion I felt both excited by the idea that I was freeing a soul from the dammed downside , but also heartache in the fact that I was losing a character that, despite the short play time, I had become somewhat attached too. My first choice was the demon Jodariel, a giant horned warrior. Now, when you consider the fact that she had the biggest aura when conducting a rite, as well as her unique techniques, this was tactically probably the worst choice that I could have made. But I didn’t care about that, she had been in the downside the longest, despite her tough exterior the game made me see through that to the character that longed to be free. Now when a game successfully influences a tactical decision with emotion, you know then, that you are well and truly hooked.

I don’t want to spoil the game so if you haven’t already and want to check out Pyre, it is available on PS4, PC and Mac for around £15. Well worth it considering its limitless play time. This flawless cross genre gem is well and truly my first cross genre crush, I feel only a hardcore-dating-casual-racing-city building simulator could maybe top it.